The exhibition, located in The Cadwell and Community Galleries at 400 County Center in Redwood City, is open to the public every weekday from 8:30 am to 5 pm and features over 70 different artists. This exhibition began March 1 and is available through April 29.

To plan such an event, San Mateo County Galleries Coordinator, Shawna Vesco, reached out to local artists to have their work included, with specific parameters to narrow down the type of art for the current theme.

“Since March is National Women’s History month, we wanted to highlight women and their views of the world as our theme,” Vesco said. “[Then] We have to make sure the call reaches as many people as possible so the exhibition will be diverse.”

Many of the artists involved had varied art styles, using mediums like paintings, collages, and even some yarn work. Additionally, there is a wide range of experience from the artists, with some getting more involved with art starting in the past few years, while others worked in fine arts for decades.

One artist, Rebecca Archer, who won the Best in Show award for this exhibition, is also a lawyer for San Mateo County. While she was very artistic when she was younger, she became involved with it within the past few years. 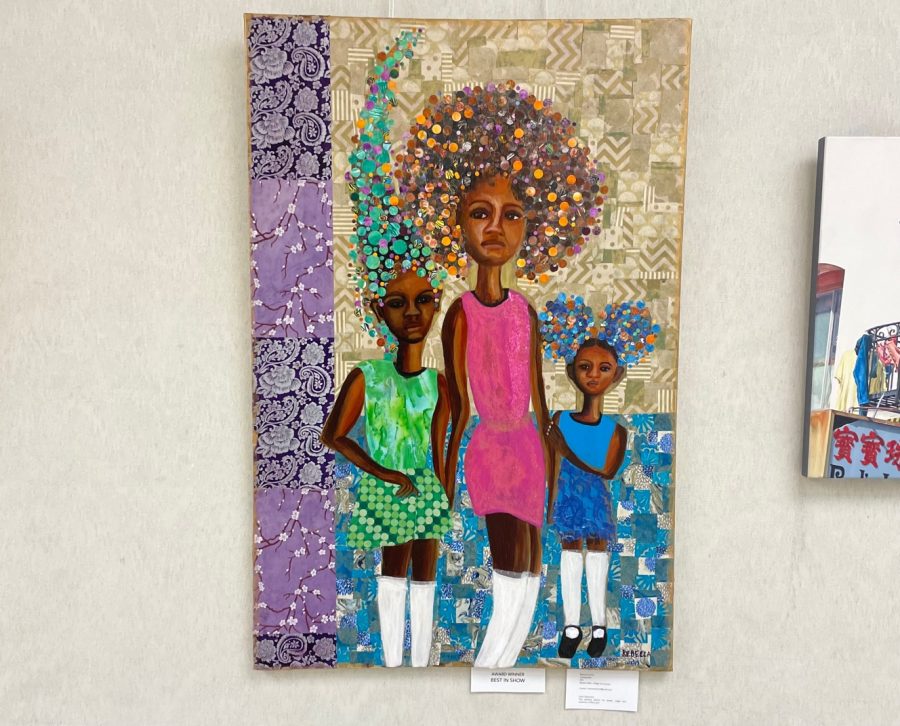 This collage, created by Rebecca Archer, won the Best in Show award in this year’s exhibition.

“I’ve been painting all my life, but then, you know, different things get in the way,” Archer said. “Probably about five years [ago], I was trying to get back into it. I was trying photography and other different things. Then when the pandemic hit, I found myself with a lot more time, so that enabled me to really get into it.”

The piece she made, a collage titled “Unbreakable,” depicting three young Black girls uniting together. She explained how she took inspiration from her upbringing and kept her art open to interpretation.

“I’m mixed-race — African American and Jewish — and I grew up all over the world,” Archer said. “I like the idea of ​​untold stories, and I like the idea of ​​mystery in people — that people can be a lot of different things, and you can’t necessarily tell from their surface who or what they are.”

Another artist, Lynette Cook, is no stranger to the arts. After working as a science illustrator for 30 years, she switched to creating art professionally, now having her work displayed in various galleries. 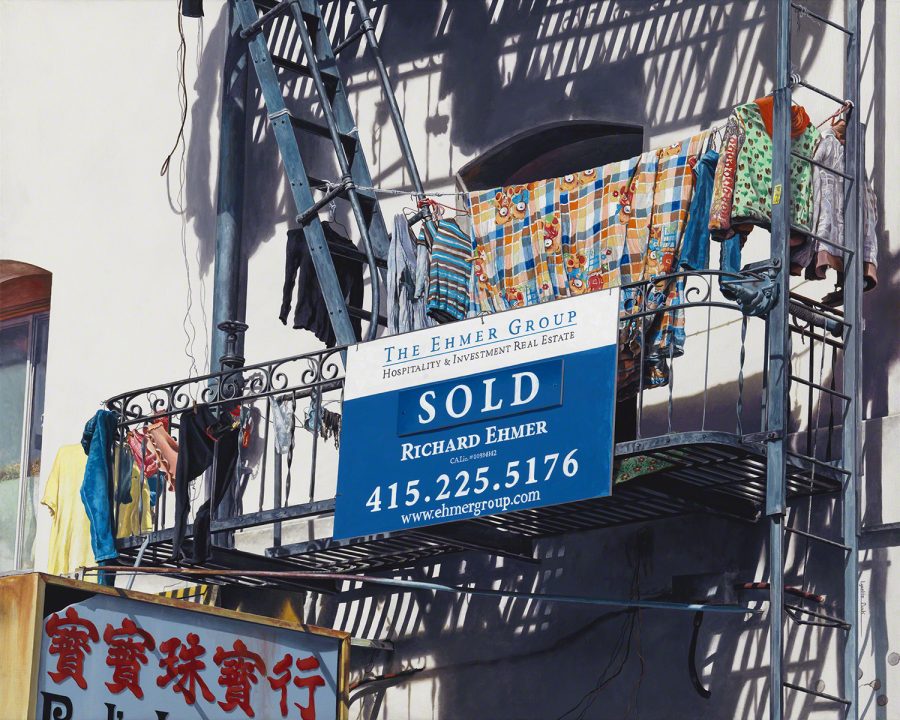 This painting, titled “SOLD” by Lynette Cook, was a runner up in this year’s exhibition.

In her piece, titled “Sold,” which was a runner-up for Best in Show, she painted a building that she had seen and admired whenever she visited Chinatown that recently got put up for sale and sold, making her worry about the residents that currently live there.

“After living in the Bay Area for a long time, being a tenant myself, you [about] what will happen to you when [your building] sells,” Cook said. “So it just brings up a lot of these human questions and this feeling of insecurity, which is a normal human experience.”

Cook focuses on realism in her work as she tries to show different perspectives with everyday objects.

“Part of what I like to do with my work is showing the beauty in things that we think of as ordinary or not really worth mentioning,” Cook said.

Other artists, like Nancee McDonell, have been involved in the Women’s View event for multiple years. McDonell has participated in this event for the past six years and teaches art classes in Half Moon Bay. This year, she made a collage with watercolors to portray women’s perception of the world as being able to see hope within chaos. 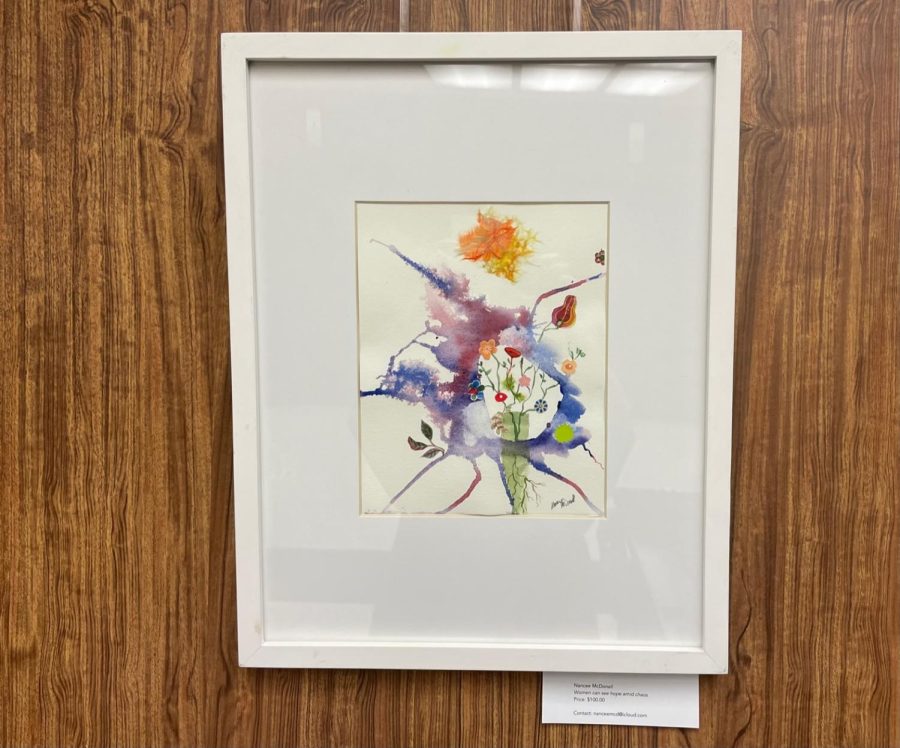 This collage/watercolor, made by Nancee McDonell, was meant to portray how women can see hope amidst chaos.

“It’s an abstract piece with bright colors that looks like it’s sort of exploding, [to say] that women are positive and can see the bright side of things,” McDonell said.

While the art styles and messages between these three artists and the other artists on display varied, what connected them, as Vesco explained, was the fact that it came from their perspective.

“It’s funny because I had several emails from artists who were worried their artwork didn’t fit the theme of ‘Women’s View 2022,’ but I assured them that any artwork they produce is essentially a ‘Women’s View’ of the world,” Vesco said.

The significance of the Women’s View goes beyond the variety of perspectives, but it also serves as a way to combat gender inequality within the fine arts. According to the National Institutes of Health87% of artists in major museums were male.

Cook noted ways to overcome these inequalities, starting with events like these.

“One component for change to happen is for women artists to be given more opportunities to show their work so that it is visible. Thus, it is important for local entities, such as the country arts commissions, to make such exhibit opportunities available,” Cook said.

Beyond additional representation, having a place to showcase hard work is an exciting opportunity for many artists, especially if someone could walk by their work and be inspired to start creating. McDonell expressed how it feels when she can help those doubtful in their art abilities be able to create something they enjoy.

“It’s really exciting to turn people that say ‘oh I can’t do anything, I can’t do it,’ then they start doing it, then they say ‘oh, this is very cool,’ so it’s very rewarding for me to do that,” McDonell said. “I think everybody has some kind of creativity in them that can create a balance in their life.”

Archer agreed with this sentiment and emphasized the importance of trying new things, as one never knows what one could learn from it.

“It’s never too late to try to be creative or tap into that side of yourself,” Archer said.