The ADDY Awards program is the largest and most comprehensive competition for recognizing excellence in advertising. Sponsored by the American Advertising Federation, the competition includes a student division designed especially for college advertising students.

In the national competition, Sam Luo and Allison Scherger won three out of the 25 Gold ADDYs, the first in school history, and Newhouse tied with two other schools for the most National Gold ADDY wins. This follows last year’s historic win of Newhouse’s first National ADDY ever, a Silver won by Mike Gaines.

“Winning ADDY awards is another successful advertising testament to the high caliber of the Newhouse curriculum,” says James Tsao, advertising department chair. “We are proud of the students’ achievement and look forward to more outstanding learning outcomes in the years to come.”

“Sam and Allison have grown so much creatively in their Portfolio courses in the advertising creative track,” says advertising professor of practice Mel White. “They are the kind of students who always worked hard, took in the feedback and then worked even harder to push their ideas further. They took advertising problems and explored creating strong and innovative visual solutions in their campaigns that are simply powerful. This visual solution thinking is emphasized in the art direction program I’ve been building here at Newhouse over the last six years.”

Newhouse students also won four awards at the District 2 ADDYs competition: one Best in Show, one Gold and two Silver. At the local Rochester Advertising Federation (RAF) ADDYs, Newhouse students won 16 of the 19 awards. Of those ADDYs, there were two Best In Show, eight Gold and six Silver.

There were two National Gold ADDY winners in the Student Print Advertising: Magazine Campaign category, and both were Newhouse creative advertising students.

Scherger, art director, won for her “Decibullz Earplugs” print ad campaign. For the same campaign, she won Silver at the District competition and Gold at the local competition. Scherger says she feels so much pride and gratitude for winning so many awards from the three shows. She also appreciates everything White has taught her and her classmates.

“Portfolio classes are never a breeze, but this would be only one example of how much the hard work pays off,” Scherger says. “Today, I wonder if I wouldn’t have these awards if I hadn’t taken extra time on the craft. I’m so grateful to have a professor who not only pushes me but also cares more about the students’ work and needs rather than the deadlines. ADDY awards are an amazing achievement, but most importantly, it’s motivation to keep up the hard work.”

Scherger’s Decibullz Earplug campaign was her first campaign ever. She spent over 25 hours photoshopping the final images for the campaign and says she worked tirelessly to make it the best it could be. 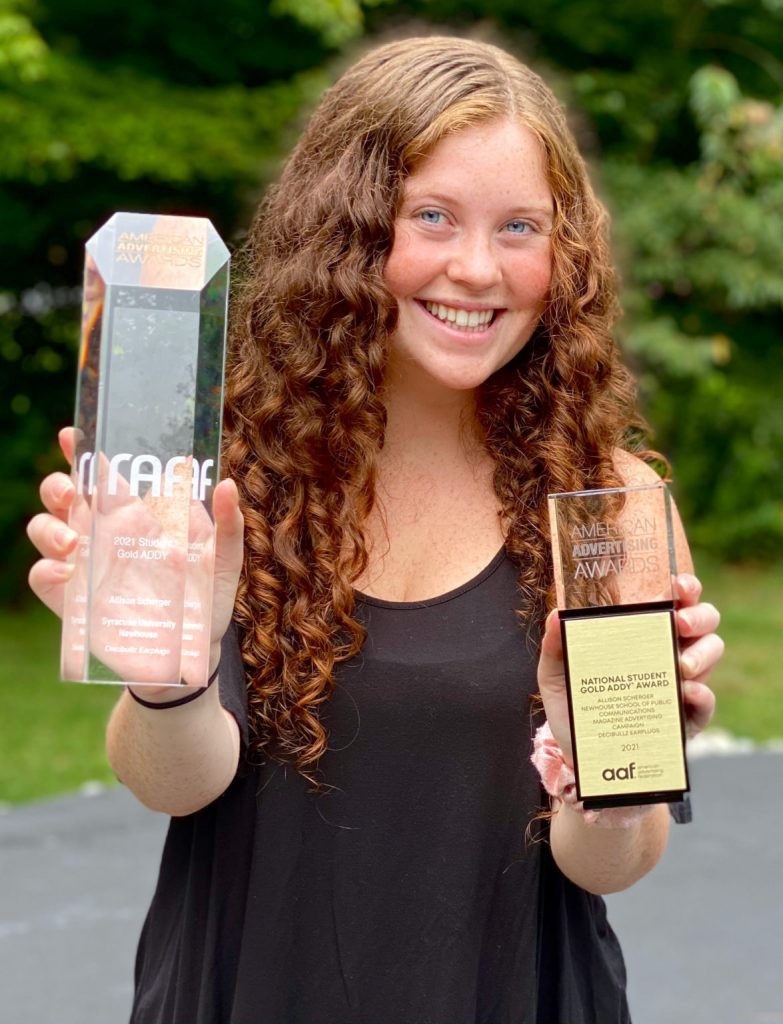 “The fact that the first campaign I ever made took me all the way to Nationals and won gold is such an amazing feeling,” Scherger says. “I was already so proud and excited to just have my work judged at the national level, let alone win the top prize.”

Luo, art director, was the other National Gold ADDY winner in the Student Print Advertising: Magazine Campaign category for his “Go in Deep” print ad campaign for Oral-B Glide Floss.

In the Student Elements of Advertising: Art Director category, Luo was the only National Gold winner for the Girls Who Code print ad campaign “A Step Behind” he created with Olivia Gormley, copywriter.

Luo says getting to share the experience with Scherger made the National ADDYs wins extra special.

“I know how hard-working and talented she is, and the fact that she won at such a young age is just a really exciting moment for both of us and for a Newhouse,” he says. “It was the first time that Newhouse had a gold-winning entry at the National ADDYs, let alone three, so we’re excited for each other.” 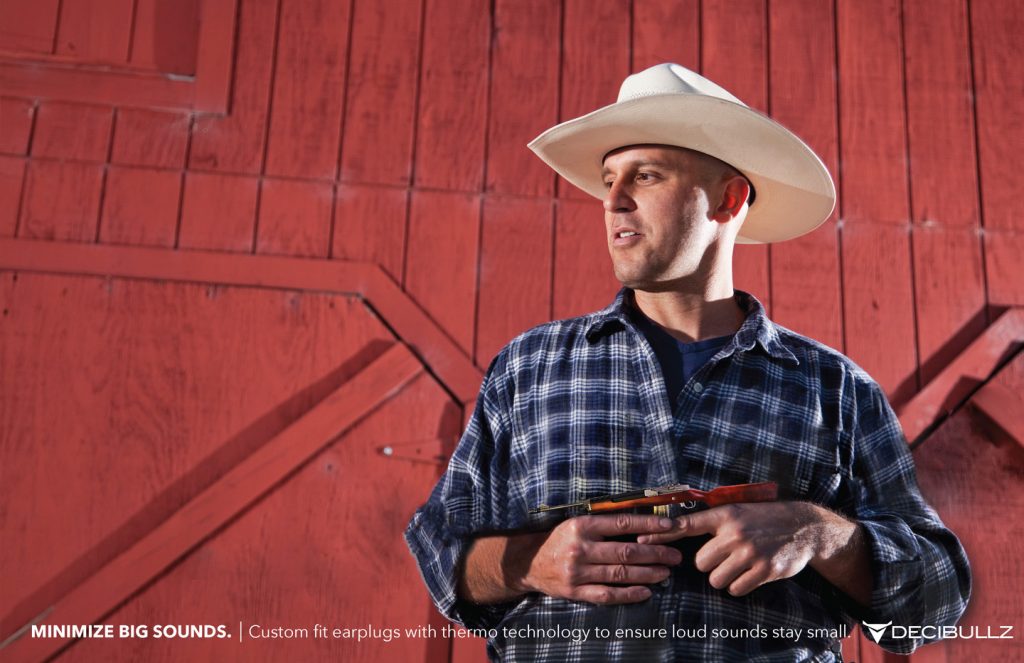 Of all the Newhouse student winners, Luo won the most ADDYs across the three competitions. Along with his two National Gold ADDYs, Luo won three ADDYs at the District 2 competition. He won a Best in Show and Gold ADDY for “A Step Behind” in the Elements of Advertising Art Direction Campaign category and a Silver for “Go in Deep” in the Print Advertising campaign category.

At the local RAF competition, Luo took home two Scholarship Best in Show awards for a total cash prize of $1,500, seven Gold and four Silver ADDYs. The two Best in Show wins were for his online interactive campaign “The Switch” for the Alzheimer’s Association and print ad campaign “McDelivery” for McDonald’s. He won Gold in the Print Magazine Campaign category for “Go in Deep” and “McDelivery” and interactive campaign “The Switch.” Luo won Gold for Art Direction for his print ad campaigns “Tame the Animal,” “Go Wild,” “A Step Behind,” and “McDelivery.” Luo’s four Silver wins went to “Tame the Animal,” “Go Wild,” “A Step Behind” and “Go in Deep.”

“I’m really proud of my work and I’m so grateful for the Rochester Advertising Federation,” Luo says. “I didn’t expect to win two Best in Show scholarships, but I’m really proud that I did.” 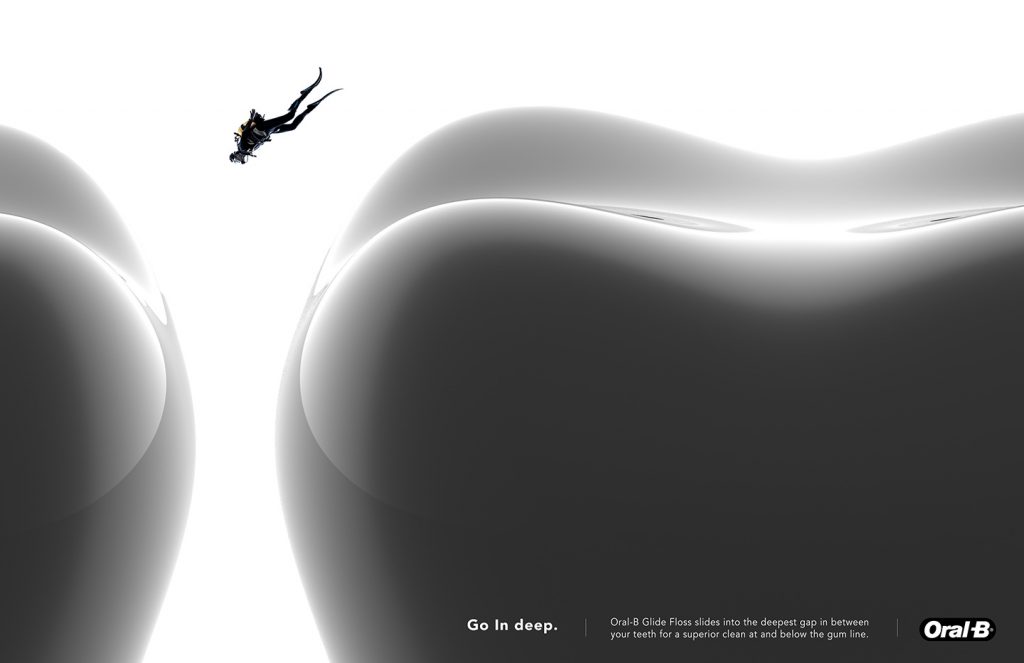 The award-winning work was created in Portfolio I, Portfolio II and Portfolio III courses taught by White and advertising professor of practice Kevin O’Neill.

“These student award competitions are really a dress rehearsal for the advertising business itself,” O’Neill says. “They sharpen our students’ competitive instincts and force them to measure themselves against only the highest, often global, standards.”